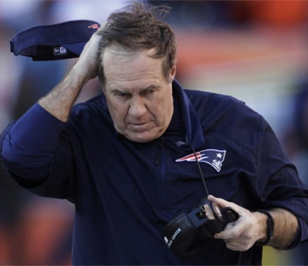 Have you ever said "Damn, the Patriots are so lucky, they get every bounce!"

Its not luck. It is 100% orchestrated by the biggest villain in the NFL.

A league investigation revealed that 11 out of 12 balls provided for the Patriots’ exclusive use in the AFC Championship game were under-inflated, by about 15%. And now the league has to spend 2 weeks promoting and celebrating a team led by a guy that deliberately smacked them in the face and disregarded their rule book.

This comes only one week after Coach Belichick went to the media and said something like “they should go read their rule book again” after Ravens’ coach John Harbaugh accused them of using trickery with their formations. A “trick” that was, in this case, perfectly within the rules. But this isn’t the first time the Patriots’ staff has been caught breaking the rules.

I don't want to hear how "it was a slow leak" or "he didn't know about it" - both are boldfaced lies. Any commentary from the players, ESPECIALLY Tom Brady, is null and void because they are in on it, and protecting their coach. After all, they are one win away from their 4th ring in 14 years. But, with this persistent illicit behavior, is it any wonder that the Patriots are the most hated team in football?

But, why tarnish the accomplishment? Every year, 32 NFL teams - 1700 players and hundreds of coaches, strive to get to where the Patriots are today. Is the secret recipe just coming up with clever ways to skirt the rules, break some if you have to, just to get an advantage? If not, then why even do it? Why not just line up with your players and be better than their players? Why even risk it?

But the biggest thing is - it’s clear that Belichick has no shame and no qualms about trying to do anything he can to get a competitive advantage. What else have they been doing that they haven't been caught at yet? Where is the limit to their cheating?

I am anxious to see how the league responds. How do they spend 2 weeks before the biggest game of the year apologizing for these actions? Furthermore, how do they punish the Patriots? The biggest penalty, and perhaps the most fitting, is to suspend their coach indefinitely, effective immediately. This is not his first offense, and obviously a half-million-dollar fine didn’t teach him a lesson. He has slapped the league in the face with their own rule book, and now there’s a chance that league is going to hand him a trophy for it. This should not get swept under the rug and dismissed.

I guess the real impact of this whole thing will be revealed on February 1st, when Brady and friends will undoubtedly be forced to use regulation balls. If the offense sputters, maybe there's a reason...?