I like to think of this game as two different halves of football. Well, maybe more like 28 minutes and 32 minutes? The Dolphins that we all expected showed up right before halftime, when Ryan Tannehill took the team 80 yards in under 2 minutes for their first points of the day, connecting with Rishard Matthews for TD #1 of the season. It would be the only time the Dolphins' offense crossed the goal line that day. 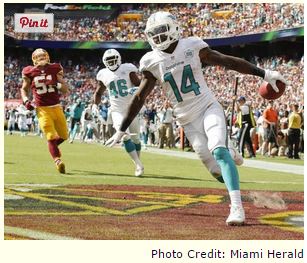 After that drive, we saw the Dolphins we expected. We saw a dominant defense which didn't allow a single point to be scored on them. We saw an offense that could move the ball at will. We saw a special teams unit which allowed a returner to run 69 yards up the middle of the field, largely untouched. But we also saw a 3rd down fumble that cost the team 18 yards (and presumably at least 3 points). We saw an opposing rusher go for 121 yards on the day. We saw a number of penalties that negated big plays and stalled drives.

Possibly the biggest area of concern is the Dolphins inability to score in the red zone. Not sure what the disconnect is, but at least twice the Dolphins approached the red zone on this Sunday, and turned the ball over without any points. This is not acceptable. The Dolphins must be able to punch it in if they want to compete with the league's elite teams.

The Dolphins certainly didn't meet expectations on Sunday, but they did enough to win. There are plenty of areas for available improvement, but it isn't all doom and gloom. I chalk it up to opening day jitters, and once the team settled down, played mostly to their potential. If they clean up those mental errors in execution and tighten up that run defense, this will still be an exciting season for the Dolphins.