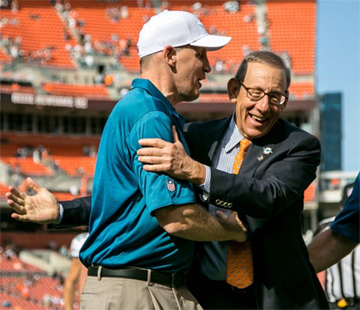 It doesn't surprise me that Ross cast his vote of confidence for Joe Philbin. Ross has always been loyal to his guys. Even when he went on national television during Monday Night Football and praised Jeff Ireland. Ireland ended up getting fired later that season.

...Which brings up the topic of Dennis Hickey. This upcoming 2015 season will be Philbin's last under contract. Initial reports indicated that Hickey's deal was for two years (although, other reports speculate that the deal was for an undisclosed length of time), making 2015 do-or-die for him as well. Hickey and Philbin could be tied together here, setting the Dolphins up for a complete reboot in 2016 if it doesn't work out.

Personally, I think Hickey's first season with the Dolphins has been a successful one, landing free agents Branden Albert, Cortland Finnegan, and Louis Delmas, and drafting standout rookies Ju'Waun James and Jarvis Landry. I'm excited to see what Hickey does this offseason. He's got a lot to consider, without the luxury of enormous amounts of cap space.

But, how do we go into 2015 with any kind of confidence that it won't just be more of the same? Can we reasonably expect to see marked improvement over another middle-of-the-road season featuring December disappointment? I am not delusional, I understand Philbin has room to grow. Personally, I think he's too conservative for today's NFL.

I think most Dolphins fans agree - I don't want to lose Bill Lazor. Lazor's offense is the primary reason why we've seen Tannehill develop into the best QB this team has seen since #13. But, I feel like vast improvement could be made on the defensive side of the ball. Is Kevin Coyle to blame for a unit decimated with injuries? Is the defense too "vanilla" to be successful? Or is it just a lack of talent? I think we have the right to expect improvement next year, but who will take the fall for this year?

I'm glad Ross did what he did. I'm glad he squashed the rumors of Harbaugh and shut down the media interrogation that was about to begin on the heels of the victory over the Vikings. I just hope he doesn't flub it again if the Niners decide to cut bait with his buddy, Jim.