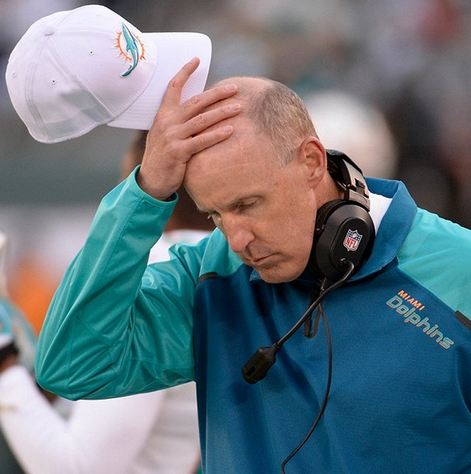 Now, those of you who know me, who have read my articles in the past, know that I’m not a typical reactionary “fire everyone” fan. I’m the polar opposite. I’m that guy that thinks you need consistency to develop talent and schemes and an identity as a team. I hate having to start over with retread coaches every other year. Coaches need time to develop also. But now, I feel that my patience has worn thin. I watched yesterday’s game, noticing the vanilla offense, the lackluster defense, and one of the worst performances in the Philbin era. It became apparent to me that this coaching staff is regressing.

I don’t like the idea of dumping our head coach after 3 weeks. But I see no path forward where Philbin can turn the ship around. Fan consensus was that the Dolphins needed to be 5-1 after the first 6 games to be able to contend for playoffs. Now, I don’t see how they can be better than 1-5. And I think there are several causes:
- The team lacks discipline. Too many stupid penalties, lack of attention to detail. Lack of urgency
- The team lacks fire. No one seems to care about their QB getting pummeled on every play. No one reacts at all.
- The team lacks identity. The team should be a mirror of the coach’s vision, and it was evident this weekend.

I’m inclined to write a similarly-worded article about general manager Dennis Hickey. Not one single Dolphins fan thought that this starting offensive line would be capable to compete in today’s NFL. But Dennis Hickey and Mike Tannenbaum were fine with it. There were at least two opportunities this offseason to bolster the position, both botched by these guys, and their hard-on for DT Ndamukong Suh. Nice player, but not a position of need. Now, instead of being a competitive team, the Dolphins have to hire more laundry guys to get the grass stains out of Tannehill’s jersey.

So, why do anything now? I think the Dolphins need to expedite this move to show that mediocrity will not be tolerated. Over the four years of his tenure, Joe Philbin has done nothing spectacular. Probably the best win the Dolphins have had over this time was a week when he was absent from camp. With the Dolphins’ upcoming schedule, I just don’t think they can pick themselves up and recover from this disaster. Find someone new and give him the chance to light a fire in camp. Truth be told, I don’t think Stephen Ross has the guts to do it.

I don’t know who the answer at head coach could be. I certainly don’t think any coach put into place now will be retained for next season. Next week, the Dolphins travel to London to face the Jets before their bye week. If this game is anything like the Buffalo game, I expect Philbin and his staff to find their own ride home. They shouldn’t be welcomed on the team jet.